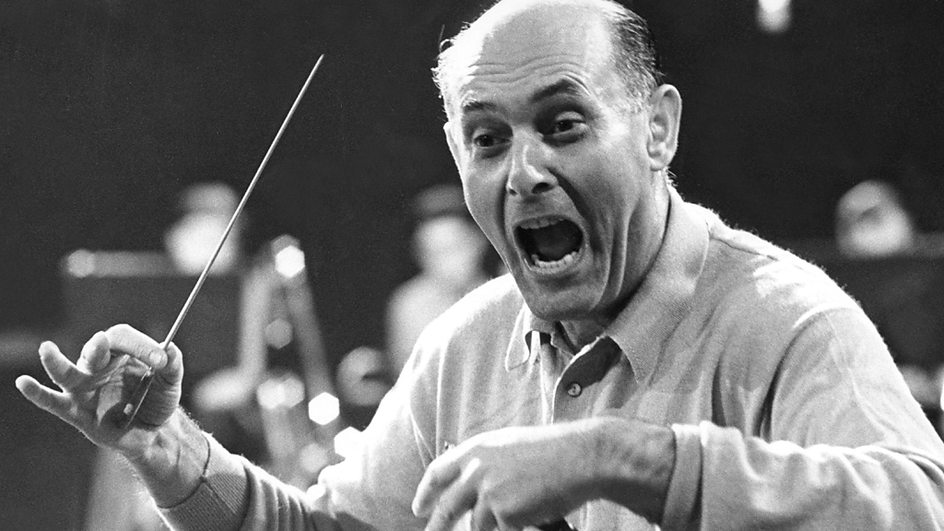 The young Sir Georg Solti’s interpretive power is on display in this electrifying performance of Siegfried’s Funeral March from Richard Wagner’s opera, Götterdämmerung (The Twilight of the Gods). The excerpt was apparently taken from a 1965 recording session with the Vienna Philharmonic. There’s a raw passion and edge-of-your-seat intensity in this playing that we rarely hear today.

I grew up listening to many of Sir Georg Solti’s excellent recordings with the Chicago Symphony. Solti’s performance of Beethoven’s Fifth Symphony with the Eastman Philharmonia was a memorable childhood concert experience. In his youth, the Hungarian-born conductor studied piano with Béla Bartók. Solti served as music director of the Chicago Symphony between 1969 and 1991 and remained the orchestra’s “Music Director Laureate” until his death in 1997. Over the course of his career, he won thirty-one Grammy Awards, more than any other recording artist.

As this clip demonstrates, a strict sense of rhythm and attention to the relationship of tempo to style seem to have been essential ingredients in Solti’s artistry. Solti’s interpretations were never fussy and always allowed the music to develop honestly.

To learn more about Georg Solti, watch this excerpt from Dudley Moore’s Orchestra! series and this documentary.

Take a moment and consider the vast number of nineteenth century symphonies which, in one way or another, take an unequivocal journey from darkness to light. The long arc of Beethoven’s Fifth Symphony, with its transcendent final movement, is a perfect example. In the opening of the last movement of Beethoven’s Fifth, C minor turns into C major, and the trombones (who wait through the first three movements without playing a note) suddenly add a new, heroically transformative voice to the mix.

By contrast, Johannes Brahms’ final symphonic statement, the Fourth Symphony, takes a starkly different road. Its opening sighs (later echoed in the third of Brahms’ Four Serious Songs, Op. 121) suggest melancholy lament. The ferocious concluding bars of the fourth movement tumble towards a resolution punctuated by a stern E minor chord (listen to the way the music loses its balance at 39:22 in the recording below). The dark finality of that last chord rings in our ears after the music is over. “Is that it?” we ask, feeling almost cheated out of the transfiguration we expected.

But the thorny realism of Brahms’ Fourth leaves us with a strangely powerful feeling of catharsis. The music evokes a complex, indescribable range of emotions. For example, in the opening of the first movement, consider the emotional ambiguity of the chord at 0:10. We might expect a simple, straightforward E minor chord at this moment, but listen to the way one added pitch in the woodwinds creates something infinitely more complex, mysterious and ambiguous.

Like Beethoven’s compositional style, Brahms’ music develops through short motivic cells, evolving, sometimes struggling, and working out a way forward. This sense of constant development led composer and Wagner enthusiast Hugo Wolf to accuse Brahms of “composing without ideas.” But in his 1933 essay, Brahms the Progressive, twelve-tone innovator Arnold Schoenberg suggested that Brahms’ compositional style (regarded as “conservative” during his lifetime) anticipated the breakdown of tonality in the twentieth century. Regardless, even some of Brahms’ friends were befuddled by the symphony when it was first performed, encouraging him to discard whole movements and allow others to remain as stand-alone pieces. On October 25, 1885, when Brahms performed a two piano version of the Fourth Symphony for friends (prior to its first official full orchestra premiere), the critic and Brahms champion Eduard Hanslick, who turned pages for the performance, said,

For this whole movement I had the feeling that I was being given a beating by two incredibly intelligent people.

Listening to the first movement, you may sense mystery and danger lurking somewhere beneath the surface. The sudden, ominous moment at 3:05 ushers in quiet, spirited fanfares which grow into emphatic statements. Notice the way this music returns throughout the movement. In the development section it plunges deeper into mysterious territory (5:19).

You’ll hear moments of incredible contrapuntal complexity. In his book, The Compleat Conductor, Gunther Schuller describes the music which follows 3:05 as,

a multi-layered structure of such complexity that I dare say there is nothing like it even in the Rite of Spring; one has to turn to Ives’s Fourth Symphony to find a parallel.

Instead of triumphantly returning to the recapitulation, we tiptoe, holding our breath (7:18). The first movement, which began with a restless sense of melancholy, ends in stern, resolute E minor.

The opening of the second movement is built on the ancient Phrygian mode and also hints at C major, but listen to the way we’re quickly pulled from this “wrong” key back into E minor. As the movement progresses, the theme we heard first in the solitary horn solo grows in intensity and scale. At 20:13 listen to the standoff between the winds and the strings. One of the aspects which makes this moment so amazing (and typical of Brahms) is the way the strings overlap with the winds and respond in asymmetrical phrases.

Brahms’ third movement is not a scherzo, as we would expect, but is instead built on Sonata form. Listen to the conversations taking place between instruments (the inner voices and bass at 24:42). Also, notice the addition of the triangle. What personas are suggested by these sounds?

A marriage of Romanticism and classical form occurs throughout Brahms’ music. The fourth movement looks back to the Baroque era, employing a passacaglia. Thirty variations are built on this repeating bass line, adapted from J.S. Bach’s cantata, Nach dir, Herr, verlanget mich, BWV 150. As you listen, consider the atmosphere of each variation. Do you hear a sense of lament in the music, which was present from the beginning of the first movement?

Here is Carlos Kleiber and the Vienna Philharmonic’s legendary performance of Brahms’ Symphony No. 4 in E minor, Op. 98:

Share your thoughts on Brahms’ Fourth Symphony and your favorite recordings in the thread below.

Conductor, harpsichordist, and early music scholar Christopher Hogwood passed away last week at the age of 73. He was an influential advocate of authentic performance practice and the use of period instruments. He helped pioneer a movement which attempted to recreate the original sound and style of baroque and classical music. In 1973 he founded the Cambridge, England-based Academy of Ancient Music. You can explore a collection of his lectures here and view a catalogue of his extensive writing and recordings here. His approach to music, which emphasized musicology, is summed up in the follow quote:

Every piece of music should be looked at as a painting that dissolved off the wall when you closed the gallery door. If all the colors dripped down into a huge pot and you took this pot, along with a recipe of how to reassemble the colors back into Van Gogh’s ‘Sunflowers,’ you would be very careful to get all the reds and the yellows in the right places, and not to paint it bigger or smaller than it was. I think music carries with it this responsibility.

A comparison of Hogwood’s period performance of Beethoven’s Fifth Symphony with the Romantic 1954 interpretation of Wilhelm Furtwängler demonstrates how different the same music can sound, depending on the philosophy of the performer.

Let’s listen to Christopher Hogwood’s sparkling and stylish recording of Beethoven’s Symphony No. 2 in D major, Op. 36 with the Academy of Ancient Music. The performance features harpsichord and period instruments tuned to a slightly lower “A” than we’re used to.

Beethoven’s first two symphonies are his most youthful and classical, but listen carefully and you’ll hear hints of explosive, revolutionary sounds to come. The music was shocking enough to elicit the following description from a Viennese critic following the premiere:

“a hideously writhing, wounded dragon that refuses to die, but writhing in its last agonies and, in the fourth movement, bleeding to death.

You may also notice the kind of humor we rarely associate with Beethoven. While the symphonies of Franz Joseph Haydn commonly featured stately minuets for the third movement, Beethoven began writing scherzos. The word “scherzo” literally translates as “joke.” Notice the musical cat and mouse games and sudden interruptions which occur between instruments in the Scherzo of the Second Symphony.

The comically boisterous opening of the final movement is like a loud guest who attracts attention at a party for all the wrong reasons. It’s an outburst which opens the door to a spirited and simultaneously ferocious romp. As the motives are tossed around and developed, notice the way they become increasingly compressed between 29:11 and 29:25. Strangely, this movement contains subtle premonitions of the Finale of the Ninth Symphony (31:55). Then there’s the eerie intensity of that moment in the coda where everything drops out except for the string tremolo. What  follows may be the biggest joke of all.

Franz Joseph Haydn was employed in London during the final years of his life. Symphony No. 104 in D major is the last of twelve “London Symphonies”. Here is a live performance with Christopher Hogwood: