The promise of spring amid the darkest, gloomiest depths of winter…that’s the Christmas metaphor of cyclic rejuvenation found in Laurence “Laurie” Lee’s poem, Twelfth Night.

American composer Samuel Barber had fallen into his own personal depths of depression when he created this chilling setting in December 1968. His second opera, Antony and Cleopatra, commissioned for the opening of the Metropolitan Opera house at New York’s brand new Lincoln Center, had been poorly received by critics. (Listen to a haunting excerpt here).

Twelfth Night‘s principal motive shares some interesting similarities with the opening motive of Barber’s Second Essay for Orchestra, completed in 1942. Both motives include close, singing lines and a wide leap. Throughout the setting, we hear close, tense harmony, with voices frequently imitating each other. Listen to the way the final chord suddenly takes us into new, open, ambiguous territory.

Here is the text:

No night could be darker than this night, no cold so cold,
as the blood snaps like a wire
and the heart’s sap stills,

and the year seems defeated.

O never again, it seems, can green things run, or sky birds fly,
or the grass exhale its humming breath powdered with pimpernels,

from this dark lung of winter.

Yet here are lessons from the final mile of pilgrim kings;
the mile still left when all have reached their tether’s end: that mile

where the Child lies hid.

For see, beneath the hand, the earth already warms and glows;
for men with shepherd’s eyes there are signs in the dark, the turning stars,

Out of this utter death he’s born again,
his birth our Saviour;
from terror’s equinox, he climbs and grows, drawing his finger’s light across our blood— the sun of heaven and the son of God.

Here is a performance by the Birmingham, UK-based vocal ensemble, Ex Cathedra. This comes from their 2012 recording, Christmas Music by Candlelight:

On Christmas morning, 1870 Cosima Wagner, the wife of Richard Wagner and daughter of Franz Liszt, awoke to the sound of music:

“As I awoke, my ear caught a sound, which swelled fuller and fuller; no longer could I imagine myself to be dreaming: music was sounding, and such music! When it died away, Richard came into my room with the children and offered me the score of the symphonic birthday poem. I was in tears, but so were all the rest of the household. Richard had arranged his orchestra on the staircase, and thus was our Tribschen consecrated forever.”

Siegfried Idyll was simultaneously a grand gesture and an intimate musical love letter. It was Wagner’s combined Christmas and birthday gift to Cosima, as well as a celebration of the recent birth of their son, Siegfried, nicknamed “Fidi”. The original title, Triebschen Idyll with Fidi’s birdsong and the orange sunrise, as symphonic birthday greeting, Presented to his Cosima by her Richard, suggests details in the music which were of personal significance to the couple. A lullaby, Schlaf, Kindlein, schlaf, played by the oboe (4:39, below), may have been linked to Wagner’s oldest daughter, Eva.

Wagner never intended for Siegfried Idyll to be performed publicly, but financial pressures forced him to sell the score to the publisher B. Schott in 1878. In order to accommodate the logistics of the stairway outside Cosima’s bedroom, the original version required a small chamber orchestra of 13 musicians: flute, oboe, two clarinets, bassoon, two horns, trumpet, two violins, viola, cello, and double bass. When Siegfried Idyll was published, Wagner expanded the orchestration to include a larger orchestra.

The opening of Siegfried Idyll seems to emerge out of subconsciousness. You can almost hear the piece waking up at the first light of dawn, gradually finding its way forward. Birdsongs (around 10:32) and horn calls draw us close to nature. At the end of the piece, the calm repose of the prolonged final chord tells us that we’re home.

We often hear a full orchestra version of this piece. Otto Klemperer’s 1961 recording captures the intimacy of the original scoring, giving us an idea of what Cosima Wagner may have heard on Christmas morning: 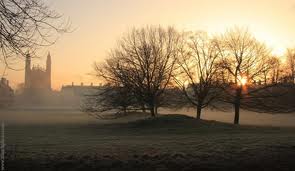 Here is Jan Sandström’s atmospheric setting of Lo How a Rose E’er Blooming, performed live by the choir of King’s College Chapel, Cambridge, England on Christmas Eve, 2009. Sandström is a contemporary Swedish composer and for me there is something about this music which captures the bleak, desolate Scandinavian landscape in December. It also has a unique flow. When the sun sets at 3:00 in the afternoon for part of the year, do you develop a different perception of time?

We’re used to hearing Lo How a Rose E’er Blooming in relatively simple four part harmony as it’s sung here by Chanticleer. Listen to the more familiar chorale version first and then contrast it with Sandström’s 1990 setting:

Take a break from the holiday hubbub and spend a few minutes listening to In Terra Pax (“And on earth, peace”), the beautiful Christmas cantata by English composer Gerald Finzi (1901-1956). You might be reminded of the lush, layered string writing of Ralph Vaughan Williams. There are also moments in the piece which may have influenced John Rutter. Get a detailed introduction of the piece here and here.

Written in 1954, this was one of Finzi’s last pieces. The opening motive was inspired by English church bells:

[quote]A frosty Christmas Eve when the stars were shining
Fared I forth alone where westward falls the hill,
And from many a village in the water’d valley
Distant music reach’d me peals of bells aringing:
The constellated sounds ran sprinkling on earth’s floor
As the dark vault above with stars was spangled o’er.
Then sped my thoughts to keep that first Christmas of all
When the shepherds watching by their folds ere the dawn
Heard music in the fields and marveling could not tell
Whether it were angels or the bright stars singing.
Now blessed be the tow’rs that crown England so fair
That stand up strong in prayer unto God for our souls
Blessed be their founders (said I) an’ our country folk
Who are ringing for Christ in the belfries to-night
With arms lifted to clutch the rattling ropes that race
Into the dark above and the mad romping din.
But to me heard afar it was starry music
Angels’ song, comforting as the comfort of Christ
When he spake tenderly to his sorrowful flock:
The old words came to me by the riches of time
Mellow’d and transfigured as I stood on the hill
Heark’ning in the aspect of th’ eternal silence.[/quote]

As a bonus, here is Daniel Hope playing Finzi’s Elegy for Violin and Piano: