It’s an example of one piece of music “giving birth” to another.

In 1880 Franz Liszt’s publisher requested a reprint of a piece Liszt had written in 1848: the Romance in E for piano. The two minute Romance begins and ends in a slightly turbulent E minor. In between, it restlessly moves, first into the relative major key of G and then flirts with a distant and ultimately unattainable A-flat major. At this moment you can hear how badly the music wants to resolve in A-flat. It ends up getting cut off by E major, which pulls us back where we belong. The final bars of the piece seem to want to hold onto the fleeting sunlight of major before sinking back into the inevitable E minor.

Franz Liszt ended up transforming the first five pitches of the Romance in E into a completely new piece, the Romance oubliée (“Forgotten Romance) for viola and piano. It seems to be the only solo viola music Liszt wrote, apart from a transcription of Hector Berlioz’s Harold in Italy. The viola arpeggios we hear in the second movement of Harold in Italy creep in towards the end of Romance oubliée at a moment of solemn transcendence (beginning at 2:55).

Here is a 1984 recording by violist Kim Kashkashian (not to be confused with a certain television personality and model with a similar name) and pianist Robert Levin: 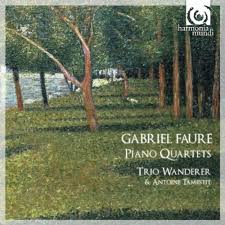 Recently, I’ve been listening to Trio Wanderer’s exceptional 2010 recording of Gabriel Fauré’s Piano Quartets. The members of the all-French trio (violinist Jean-Marc Phillips-Varjabédian, cellist Raphaël Pidoux and pianist Vincent Coq) first performed together as students at the Conservatoire de Paris in the early 1990s. Their background includes studies with the Amadeus Quartet and with Menahem Pressler of the Beaux Arts Trio. Here, they’re joined by violist Antoine Tamestit. The buoyant, suave sense of French style, a wide array of rich tonal colors, and remarkable clarity and balance make this recording stand out.

The soul of the music also comes to life on this disk. Trio Wanderer’s performance captures the sparkling, mercurial spirit of Fauré’s Piano Quartet No. 1 in C minor, Op. 15 (below). This music has the same unexpected harmonic twists and turns we hear in Fauré’s famous Sicilienne et Berceuse. It floats along, evolving and changing shape, like wispy clouds against an otherwise clear blue sky. It’s filled with musical conversations (listen around 0:36 and 1:22). Glistening splashes of color emerge from the piano’s arpeggios and running passages. From the opening bars, there’s an unrelenting sense of forward motion. But listen carefully and you’ll catch rare and fleeting moments of simplicity and repose (for example, at 3:44 and at the end of the first movement at 8:57).

Notice the subtle change in color and atmosphere in the middle of the Scherzo (12:06). Here, we seem to enter a darker, veiled, nocturnal world. Then, there’s the haunting moment at the end of the Adagio when, just as the movement seems to be winding down, we discover that it has more to say (20:43). A final statement of lament follows.

Throughout the final movement, notice the way the forward motion is interrupted occasionally by a harmonic “brick wall” (22:34, 26:22). Each time, we bounce back quickly. But listen for the moment at the end of the movement where the motion completely stops…

No, this post isn’t about following your intuition…today we’re talking about musical inner voices, those sometimes inconspicuous lines between the melody and the bass, which are often the essence of a piece’s drama. If you have any doubts about the importance of these lines, often played by violas and second violins in orchestral and string quartet repertoire, watch this short but funny clip of conductor Sergiu Celibidache rehearsing the Adagio from Anton Bruckner’s Symphony No. 7.

Ensemble playing is about teamwork and every part is essential to the whole. Let’s listen to a few orchestra excerpts, which are great examples of the power of inner voices.

Take a moment and think about all of your Facebook friends or cell phone contacts. Could you imagine music which would fit each personality? English composer Sir Edward Elgar (1857-1934) wrote a series of variations on this original theme, each depicting one of his friends. He assigned each variation a cryptic title, leaving audiences to guess who was being represented. The piece has commonly come to be known as the Enigma Variations. The variations run the gamut from lighthearted to fiery. One of the most famous and memorable parts of the piece is Variation IX, a moving chorale dedicated to Elgar’s publisher and close friend, August Jaeger. Listen carefully to the inner voices. Pay attention to the contour of the lines and the way they fit together. Listen for moments of harmonic tension:

Tchaikovsky’s final work, Symphony No. 6 “Pathétique”, features a triumphantly rousing third movement, followed by a Finale which sinks into the deepest despair (Adagio lamentoso – Andante). What’s interesting is the way Tchaikovsky chooses to write the opening theme of the final movement. As a listener, you might make the logical assumption that the first violins play the prominent descending scale line (F-sharp, E, D, C-sharp, B, C-sharp). But the actual opening line for the first violins is B, E, G-sharp, C-sharp, E-sharp, C-sharp. It sounds pretty strange when played by itself. The second violin part has similar jumps. So who has the famous melody? It turns out that the melody and inner voices alternate back and forth between the first and second violins. Today the second violins in an orchestra typically sit next to the firsts, but in Tchaikovsky’s day, the seconds faced the firsts on the other side of the stage (where the cellos usually are now). Tchaikovsky achieved the nineteenth century equivalent of surround sound.

In this performance, conducted by Valery Gergiev, the second violins are seated across from the firsts:

In the final movement of Beethoven’s Symphony No. 5, a seemingly insignificant inner voice becomes the star of the show. Listen to the supporting voice at 1:11, which mirrors the top voice in contrary motion. As the development section begins, we hear it again (4:28), then more prominently in the trombones. Listen as this inner voice is transformed into a powerful, heroic proclamation played by the whole orchestra (5:28).

What are your favorite inner voices? Share your own listening suggestions in the thread below. 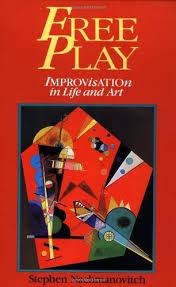 What is the source of a creative idea? What is the link between art and spirituality? How can we unlock our inner muse, find joy in the creative process and unleash the full potential of our imagination? Stephen Nachmanovitch’s book, Free Play: The Power of Improvisation in Life and the Arts delves into these questions. Nachmanovitch is an improvisational violinist and violist, computer artist and teacher. Musicians and non-musicians alike will find his book meaningful, inspiring and thought provoking.

Nachmanovitch stresses that improvisation is not chaotic, but flows from a natural formal structure:

[quote]We carry around the rules inherent in our organism. As living, patterned beings, we are incapable of producing anything random. We cannot even program a computer to produce random numbers; the most we can do is create a pattern so complex that we get an illusion of randomness. Our body-mind is a highly organized and structured affair, interconnected as only a natural organism can be that has evolved over hundreds of millions of years. An improviser does not operate from a formless vacuum, but from three billion years of organic evolution; all that we were is encoded somewhere in us.[/quote]

Nachmanovitch also highlights the common threads which run through music, dance, visual art, literature and religious traditions. He shows that life and art are inseparable. Michelangelo believed that the statue already existed and that his job was simply to carve away the excess stone. Nachmanovitch suggests that:

[quote]As stone is to a sculptor, so time is to a musician. Whenever he gets up to play, the musician stands there facing his own unsculpted block of time.[/quote]

Nachmanovitch stresses the ephemeral aspect of improvisation and the spontaneous creative impulse:

[quote]The fact that improvisation vanishes makes us appreciate that every moment of life is unique-a kiss, a sunset, a dance, a joke. None will ever recur in quite the same way. Each happens only once in the history of the universe.[/quote]

To learn more about Nachmanovitch and his work, visit his website, listen to this podcast and watch this short interview:

An ostinato is a musical motif or phrase that is persistently repeated.  Here are three pieces from the Baroque period that are constructed around a repeating bass line known as a basso ostinato, or ground bass.  In each case, the bass line provides the framework for a set of increasingly complex and thrilling variations.  It’s as if the composer is saying, “Listen to how clever and inventive I can be!”

The performance below by the San Francisco Early Music Ensemble uses period instruments and attempts to authentically capture Baroque style.  Notice that the bows differ slightly from our modern bows and hardly any vibrato is used.

The cello provides the ground bass.  Listen to the contour of this bass line as it moves stepwise downward and then gets pulled back again.  A Baroque organ and theorbo (a plucked string instrument similar to a lute) fill in the harmony, providing what is known as a continuo.  The solo violins perform a three part canon.  A canon is “a contrapuntal composition that employs a melody with one or more imitations of the melody played after a given duration.”  In Pachelbel’s canon the voices are two measures apart.  Pay attention to the way the three identical solo parts fit together.

Similar to a chacconne, a passacaglia is a Baroque dance form that features a series of variations over an ostinato bass.   Handel wrote this music for a harpsichord suite that was published in 1720.  The Norwegian violinist and composer Johan Halvorsen (1864-1935) made this spectacular arrangement, re-scoring Handel’s variations for violin and viola.  Here, violinist Itzhak Perlman and violist Pinchas Zukerman perform this dazzling virtuoso showpiece as an encore.

You will hear amazing new details each time you listen to this piece.  Bach was a master of counterpoint, which is “the technique of combining two or more melodic ideas in such a way that they establish a harmonic relationship while retaining their linear individuality.”  Listen to the way Bach weaves new musical lines over the repeating passacaglia theme.  Also, listen to the exciting ways Bach chooses to harmonize these lines.  Like Pachelbel, Bach was an organist and, starting out with a pre-existing melody (often a choral tune, but in this case a passacaglia), he improvised this complex music for church services.  Only later were these improvisations written down.

The second part of the piece is a Fugue (starting at 8:06) which is “a contrapuntal composition in which a short melody or phrase (known as the subject) is introduced by one part and successively taken up by others.”  Bach uses the first eight notes of the passacaglia theme as his subject.  See if you can pick out the subject each time in enters.  Sometimes it will be higher in register, other times lower, and it will usually be surrounded by other musical lines.  The music becomes increasingly complex, modulating to different keys before triumphantly returning to the home key of C (this time Major replacing minor).

Enjoy the music and if you feel inspired, leave a comment below.  Your insights greatly enrich the conversation!