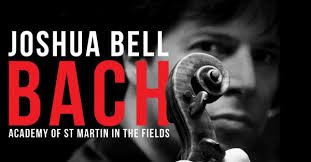 Joshua Bell released his newest album yesterday. The CD, simply titled “Bach”, is Bell’s first recording collaboration with the London-based Academy of St. Martin in the Fields since becoming the orchestra’s music director in 2011.

If you’re expecting another predictable round of Bach concertos, you may be surprised. This album includes the monumental Chaconne from Partita No. 2 with Mendelssohn’s rare piano accompaniment (adapted for orchestra), as well as Schumann’s accompaniment of the Gavotte en Rondeau from Partita No. 3. It’s not the way you would want to hear solo Bach every day. In fact, Mendelssohn’s addition practically turns the Chaconne into a completely new piece. Still, these offerings fall to the category of historical curiosity and are worth exploring.

It’s the A Minor and E Major Violin Concertos which make this recording stand out. The connection between Bell and the Academy of St. Martin in the Fields feels more like chamber music than a violin solo with orchestra accompaniment. There is incredible attention to detail, balance, and sense of dialogue. In the haunting second movement of the E Major Concerto, the bass line converses with the solo violin, while long sustained chords in the violins suggest an atmosphere of mystery. Bell occasionally adds ornaments and captures the joy of the Baroque dance-like rhythms. Air on the G String is also included. “Bach” is available on iTunes.

The release of Joshua Bell’s CD coincided with his return to the Washington D.C. metro yesterday. This time, unlike his extensively publicized 2007 experiment, commuters recognized him and stopped to listen.

You can hear Bell with the Academy of St. Martin in the Fields in this clip of the final movement of Mendelssohn’s Violin Concerto. Also, listen to him play the Bach Chaconne in its original, unaccompanied form: