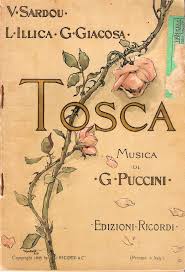 Through the expressive power of music, opera conveys the deepest and most complex human emotions. It allows us to enter the psyche of characters and experience the drama on a gut level. Opera, with its far flung story lines and sung libretto, can’t be approached literally, as if you’re watching a movie or a play. It has to be experienced as metaphor…a story unfolding through music.

Vissi d’arte (“I Lived for Art”) is one of the most famous arias from Giacomo Puccini’s three act opera, Tosca, written in 1900. It’s an intimate and despairing prayer, sung by Tosca in the second act, as she faces the torture and execution of her beloved Mario Cavaradossi at the hands of the Baron Scarpia. The synopsis of the entire opera is here.

Here is an English translation:

The aria’s opening descending line, with its impressionist parallel harmony, gives us a sense of Tosca’s anguish. The music seems numb. Tosca’s intimate moment of reflection is not a prayer rooted in faith but in desperation and hopelessness. Yet, as the aria unfolds, Puccini matches Tosca’s bitter words with one of the most beautiful, soaring melodies imaginable. For me, this irony is what makes Vissi d’arte especially powerful. Through Puccini’s music, we gain access to the full, complex spectrum of Tosca’s emotions.

Throughout Andrew Lloyd Webber’s Broadway score for The Phantom of the Opera there are many clever nods to opera. I’m always struck by the similarities between the melody of All I Ask of You  and Puccini’s Vissi d’arte.

The second act concludes with Tosca fatally stabbing Scarpia. Listen to the way Puccini’s music builds tension throughout the scene. Scarpia’s fate is foreshadowed by the icy woodwind chord “Wait.” (1:46):

As Tosca solemnly places the candle next to Scarpia’s body (8:20) the earthly world (the low strings) meets the supernatural (the woodwinds and harp). Drawing back in terror (8:54), Tosca is suddenly overcome with the full realization of what has happened. Puccini denies us the stable harmonic conclusion we would expect at the end of an act. Instead, as the curtain falls, the music abruptly modulates, mirroring Tosca’s visceral shock and confusion.