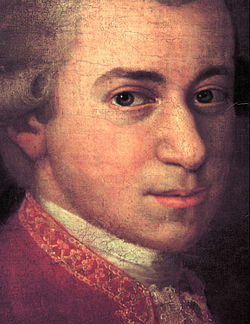 Last week we stepped into the strange, mysterious world of Beethoven’s Late string quartets, music which stylistically leaves behind everything that came before and offers up profound and timeless revelations.

In its own way, Mozart’s last piano concerto (No. 27 in B flat major, KV 595) makes a similar, if more subtle departure. It still sounds like the Mozart we know, but listen carefully and you may notice something different about this music…perhaps an occasional hint of wistful sadness and even wrenching pain.

Concerto No. 27 was first performed in early 1791, the year of Mozart’s death, at a concert that may have marked Mozart’s final public appearance on the concert stage. By this time, Mozart’s performing career was already winding down. His wife, Constanze was ill and he was deeply in debt. He was treated with contempt by the new Emperor, Leopold II. The publisher, Hoffmeister, refused to continue to publish Mozart’s music unless the composer turned out simpler and more popular works, to which Mozart replied, “Then I can make no more by my pen, and I had better starve, and go to destruction at once.” But the sizable amount of music Mozart wrote in 1791 (which included a piece for glass harmonica, a string quartet, the Clarinet Concerto, The Magic Flute, and the Requiem) transcended all of this.

Concerto No. 27 opens with a wordless conversation between two contrasting opera characters. The strings make a quietly passionate opening statement amid playfully comic interjections by the winds. At the 0:37 mark, the final movement of the “Jupiter” Symphony (completed three years earlier in 1788) briefly surfaces. (Listen here for a comparison). Similar to Jupiter, Mozart’s final concerto is filled with counterpoint (multiple musical lines happening at the same time). As you listen, notice all of the musical voices surrounding the piano line: the way they weave together, move apart, and converse. From the violins to the flute, oboe, and bassoon, each voice has a distinct persona and something to say. You can hear this in the passage beginning around 4:00, with the entrance of the flute. Or listen a few moments later when the piano and strings fade into a solitary woodwind line. Notice the way the line grows and changes shape, as the oboe, flute, and piano trade places.

Entering the first movement’s development section, we’re suddenly confronted with one of those hints of sadness I mentioned earlier. This once assured music gradually begins to falter and fade into silent pauses. When the piano enters, we’re in a new and different world. And do you remember those playful woodwind interjections from the movement’s opening? Now they are transformed into a shockingly stern interruption in the wrong key. A moment later, the piano picks up the “interruption” motive and the oboe takes the singing piano melody. Listen for all of this here and then notice the way we return safely home at the recapitulation.

The second movement is a quietly introspective aria. Amid the simple perfection of the opening melody, perhaps a lonely, solemn march, there’s a sense of lingering sadness. Again, notice the way the voices interact: the three distinct voices in the strings, joined by the singing woodwind line in this passage, the oboe joining the bassoon in a single, sustained pitch here, the winds interjecting with a repeated chord a few moments into this excerpt.

The opening melody’s final statement occurs as a shadowy whisper, the piano, flute and violins sharing the melody and creating an almost ghostly sonority. In the final moments of the second movement, there’s a sense that the music doesn’t want to let go as it shifts to a series of deceptive cadences to avoid an ultimate resolution. In the final bars, seven distinct contrapuntal voices can be heard.

The frolicking final movement dances with playful, comic interruptions. The cadenzas in the first and final movements (often improvised by the performer) were written by Mozart. At the end of this final cadenza, the solo piano pauses for a moment of brief introspection. In the final bars, the main motive is tossed around the orchestra as the piano erupts in joyful, bubbling arpeggios.

Come, sweet May, and turn
The trees green again,
And make the little violets
Bloom for me by the brook!

Now that we’ve touched on a few details, let’s listen to the entire piece without interruption. Here is an exceptional performance with Portuguese pianist Maria João Pires and the Chamber Orchestra of Europe, conducted by Trevor Pinnock:

The Magic Flute, Mozart’s bizarre two act comic opera, can be seen as a fairy tale battle between the forces of darkness and light. Like all good fairy tales, at the end of The Magic Flute’s second act, love and happiness triumph. The Singspiel opera (featuring singing as well as spoken dialogue) was written in the prolific final year of Mozart’s life. It premiered in 1791 at the popular Theater aug der Wieden on the outskirts of Vienna. Amid its convoluted story, Masonic symbolism, Enlightenment philosophy and sly political references (the sinister Queen of the Night might be a coded allusion to Austrian Empress Maria Theresa), is Papageno, the bird catcher. He isn’t exactly a main character, but he’s there, nonetheless, through most of the opera (read the synopsis here). In the first performance the role was sung by the opera’s librettist, Emanuel Schikaneder.

Mozart’s music tells us everything we need to know about Papageno as a character. He’s a clownish buffoon, decidedly unheroic, who tries to lure birds with his panflute. But, as the music suggests, he also exhibits a vivacious and contagious passion for life. He’s imperfect, yet amiable and we can relate to him. Here is “Der Vogelfänger bin ich ja” (The birdcatcher am I) from the first scene of Act 1:

You might remember the next excerpt from the movie, Amadeus. Here is “Ein Mädchen Oder Weibchen” (A maiden or a wife), in which Papageno longs for female companionship:

At the end of The Magic Flute, Papageno’s magic bells summon Papagena. The couple dreams of the many future children they will have.

Mozart and Schikaneder were both Freemasons and lodge brothers. Judith Eckelmeyer’s analysis of The Magic Flute includes a discussion of the work’s Masonic symbolism as well as the use of the “golden mean” and attention to mathematical proportion. Three is a significant number in Masonic symbolism, and patterns of three occur throughout the opera. In the middle of the overture listen for three repeated chords.

Here is James Levine and the Metropolitan Opera Orchestra:

Neither a lofty degree of intelligence nor imagination nor both together go to the making of genius. Love, love, love, that is the soul of genius.

The music is not in the notes, but in the silence between.