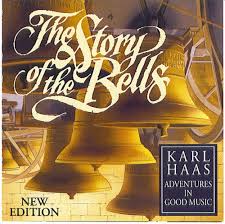 Some Listeners’ Club readers may remember Adventures in Good Music, the nationally syndicated radio program hosted by German-American musicologist Karl Haas. The show, which always began with Haas’ trademark greeting, “Hello everyone,” aired between 1970 and 2007 and became radio’s most popular classical music program.

Each year on Christmas Eve, Haas dedicated his show to the distinctive sounds of church bells throughout Europe and the Middle East. He provided a fascinating documentation of the unique bell sound of each city, along with a brief history of bell ringing. Listening to these programs, I was always struck by the continuity of tradition at the heart of European bell ringing. In most cases, these are sounds which have been heard for centuries.

The Story of the Bells must have been one of Haas’ most popular programs, because it’s one of the few episodes which can be found on CD. Last year, The Listeners’ Club continued the tradition with two bell-related posts, Europe’s Age Old Bells and Change Ringing in England. Now, in honor of Karl Haas, here are a few more. Listen to the way the sound builds gradually, sometimes starting with a single bell and ending in a glorious cacophony. Notice the rich overtones and distinct timbre of each cathedral.

It’s an awesome sound…a sound which leaves no room for human voices.

Here are sounds from Salzburg, the birthplace of Mozart. Also listen to a 1967 recording of the Vienna Boys Choir singing the Austrian Christmas carol, Still, Still, Still.

Here are the bells of St. Mark’s Basilica in Venice. And let’s go inside to hear Christmas music of Giovanni Gabrieli.