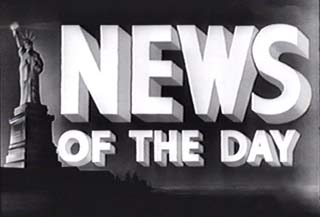 From the ominous minor second “shark motive” in Jaws, to E.T.’s soaring “Flying Theme,” to the terror of Psycho’s blood-stained shower, music plays an obvious role in heightening the drama of our favorite movie scenes. Music has the unique capability to transcend the literal and transport us into the world of metaphor, a place where fundamental truths are most deeply and directly experienced. In some cases, music may be the most important dramatic ingredient. For example, video footage of a crocodile could be set to frightening music or to a Scott Joplin rag. In one case we would feel a sense of danger, while in the other we would perceive the same crocodile comically.

Television news also uses music to subtly manipulate our emotions. News music’s patchwork of “opens,” “rejoins,” “bumpers,” and “closes” not only establishes a branding identity for the news station (as the no nonsense, “reporter as private detective” sound of the 1970s local news theme, Move Closer to Your World does), but also, more troublingly, occasionally heightens the drama of the news itself.

Walter Cronkite’s first CBS Evening News broadcast contained no music. Apart from this teletype bumper, CBS would not add music until 1987. Throughout the 1970s NBC used a series of emotionally neutral themes, culminating with this simple open, featuring the NBC motive. It was John Williams’ lush, soaring orchestral NBC theme, The Mission, which became a game changer for network news music in 1985. For the first time, the broadcast began with a dramatic “headline bed”, which suddenly gave added urgency and tension to the anchor’s words. CBS quickly responded with its own “headline bed”, set a half step higher than NBC’s, probably with the goal of sounding subliminally more urgent to indecisive viewers who might be flipping between networks as the newscasts opened. ABC World News Tonight also went a half step higher than NBC with its “headline bed.” In 1991, CBS raised its “headline bed” another half step, trumping the urgency of both NBC and ABC.

All of the networks crafted glitzy music to accompany coverage of both Iraq Wars (listen to ABC’s, CBS’s, and NBC’s). These soundtracks for war blur the line between reality and illusion in troubling ways. When war becomes entertainment, the citizen becomes a passive spectator. Political ads from Ronald Reagan’s Morning in America to Barack Obama’s stadium infomercial similarly use music to manipulate emotions.

Before television, movie newsreels used music to blend news, propaganda, and entertainment. Watch this newsreel from the 1937 Hindenburg disaster and this clip from the Battle of the Bulge in the Second World War.

[I] thought how amusing it would be to imagine these events and write music to go with them, so I did. . . . It was great fun to do—kind of a joke. Lukas Foss loves that piece. . . . He never played anything of any importance that I wrote, but he loved that.

Here is the conductor Lukas Foss’ recording of Newsreel in Five Shots with the Milwaukee Symphony: