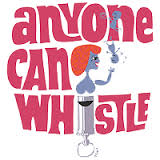 There’s an interesting irony at the heart of musical performance. As musicians, we spend countless hours in the practice room in order to achieve the highest level of technical control. Technical assurance gives us the freedom to let go, enter “the zone” and allow the music to come to life. We cherish the rare, exhilarating performances which rise above “good” or “technically solid” and tap into a higher energy. At these moments the music almost seems to be playing the musician. Discovering the ability to let go and overcome ego is a lifelong challenge for all of us.

Stephen Sondheim’s song, Anyone Can Whistle, may make you think about the creative process and the ability to get out of your own way. The song comes from the second act of his 1964 musical by the same name. The show closed after only nine performances, but it launched the Broadway career of Angela Lansbury. Anyone Can Whistle is sung by Lee Remick on the original cast album:

[quote]Anyone can whistle, that’s what they say-easy.
Anyone can whistle, any old day-easy.
It’s all so simple.
Relax, let go, let fly.
So someone tell me, why can’t I?
I can dance a tango, I can read Greek-easy.
I can slay a dragon, any old week-easy.
What’s hard is simple.
What’s natural come hard.
Maybe you could show me how to let go,
Lower my guard,
Learn to be free.
Maybe if you whistle,
Whistle for me[/quote]

Notice the contour of the melody and the way it relates to the words and the character. Sondheim gives us a dissonance on the word, “hard” (1:19), evoking a feeling of “hardness”.

Other notable songs from this show include Me and My Town,  There Won’t Be Trumpets, A Parade in Town, Everybody Says Don’t  and See What it Gets You. One of Sondheim’s earliest shows, you can hear echoes of his later works in the score of Anyone Can Whistle.