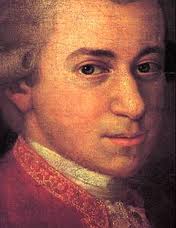 Listening to Mozart’s symphonies, concertos and chamber music, you might get the sense that you’re hearing wordless operas. Even without a libretto, we can sense distinct characters, musical conversations and dramatic situations unfolding in the music. It’s as if the innovative and prolific composer of The Marriage of Figaro, Don Giovanni, and The Magic Flute couldn’t shut off the flood of opera arias and duets entering his mind. As a musician I have found that approaching Mozart this way makes the music come to life in exciting ways. As Tchaikovsky can be experienced through ballet and Beethoven through the symphony, Mozart’s music is rooted in opera.

To get a sense of Mozart’s genius as an opera composer, let’s start by listening to a few excerpts from a 1999 Metropolitan Opera production of The Marriage of Figaro. We’ll begin with the opening of Act 1. Here as Figaro takes measurements for a bridal bed and Susanna, his bride-to-be, tries on her wedding bonnet, there is a hint at the comic troubles which will ensue. The somewhat clueless Figaro is delighted with their room in the palace while Susanna is troubled by its proximity to the Count, who has been making advances towards her. Consider how the overture sets the stage for this complex comedy and true “day of madness.” How does Mozart’s music provide us with insight into the characters and dramatic situation?

In his book, The Classical Style, Charles Rosen suggests that with The Marriage of Figaro Mozart begins to break down the typical aria-recitative structure in favor of something more sophisticated and closer to sonata form. Mozart’s music not only captures the inner thoughts and feelings of the characters, but also provides a sense of the arch of the drama. Here is the climactic end of the Finale of Act 2:

Now let’s hear the wordless but operatic duets of Mozart’s Sinfonia Concertante for Violin, Viola and Orchestra in E-Flat Major, K. 364. Here is a great recording with Itzhak Perlman playing the violin, Pinchas Zukerman on viola and the Israel Philharmonic conducted by Zubin Mehta. Let’s start with the second movement (Andante). What kind of a conversation is taking place here between the violin and viola? We don’t have anything literal to go on, but we still have an idea of what is being said.

Go back and listen a few times to this emotionally powerful music. Then listen to the first and third movements. How is the tone of the conversation different in these outer movements? Pay attention to the way one voice imitates another in the back and forth dialogue.

[quote]My Violin has just been restrung, and I`ve been playing on it every day. I`m telling you this only because Mama once wanted to know if I was still playing the violin. On at least 6 occasions I`ve had the honour of going on my own to church or to some other important function. In the meantime I`ve written 4 Italian symphonies footnote5 in addition to the arias, footnote6 of which I`ve already written 5 or 6, as well as a motet.[/quote]

-An excerpt from a letter Mozart wrote to his sister, dated August 4, 1770

Mozart was an excellent violinist but, as the letter above suggests, he considered the violin to be a second instrument. Mozart’s violin concertos, written when he was 19, generally seem lighter and more carefree than his piano concertos. But here in the first movement of Violin Concerto No. 5 in A Major, K. 219, again we hear opera. What kinds of characters would be singing this music? What dramatic situations might be involved? Listen for a dialogue between voices within the single violin line.

Here is a performance by the legendary French violinist, Arthur Grumiaux with the London Symphony and Sir Colin Davis. The recording showcases Grumiaux’s elegant style of playing and golden tone. Every note seems to ring with a bell-like purity:

Here is Sabine Meyer playing the second movement of Mozart’s Clarinet Concert in A-major, K. 622. Imagine this as an aria in one of Mozart’s operas: