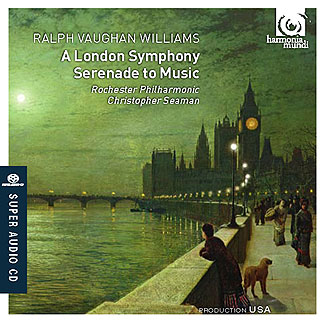 Written in 1914, A London Symphony musically captures the varied moods of London from its dense fog to the chimes of Big Ben along the River Thames. The music is lushly atmospheric and this recording brings out a rich tapestry of orchestral color. Vaughan Williams draws on English folk music throughout.

Here are what some critics have said about the CD:

[quote style=”boxed”](A) fine recording of an English classic. It is rich in accuracy of detail and felicity of mood throughout. The majesty of the finale (of the symphony) is as impressive as I have ever heard. -Michael Kennedy, The Sunday Telegraph (UK)[/quote]

[quote style=”boxed”]The playing from every section of the ensemble is first rate … always controlled and defined, but with plenty of punch too.—Gavin Dixon, classical-cd-reviews.com [/quote]

I highly recommend this recording. Start listening now and I’ll have a few more thoughts about A London Symphony in a future post.