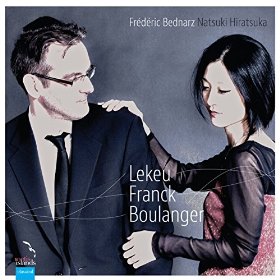 Canadian violinist Frédéric Bednarz and pianist Natsuki Hiratsuka have released an exciting new recording of French violin music. The centerpiece of the recording is César Franck’s famous Sonata in A Major for Violin and Piano. This is a beautifully colorful and passionate performance with a seamless and cohesive sense of ensemble between violin and piano.

The seldom heard music of Belgian composer Guillaume Lekeu (1870-1894) opens the CD. Lekeu’s G major Violin Sonata was commissioned by Eugène Ysaÿe and first performed in 1893. There are echoes of Franck in the music. (César Lekeu studied counterpoint and fugue with Franck). Guillaume Lekeu died tragically at the age of 24 after contracting typhoid fever.

Rounding out the recording is Lili Boulanger’s brief but extraordinary Nocturne for Violin and Piano, written in 1911. Hazy and impressionistic, the music ends with a passing quote of Debussy’s Prelude to the Afternoon of a Faune. Lili was the younger sister of the influential composition teacher Nadia Boulanger.

Listen to the full recording here.

Polish composer and pianist Karol Szymanowski (1882-1937) is sometimes overlooked, but his music occupies an important position between Late Romanticism and the French Impressionism of Debussy and Ravel. Written in 1904, Szymanowski’s Violin Sonata Op. 9, grabs your attention with a powerfully brilliant opening. This recording captures a sense of strength and heroism as well as the more ethereal side of the music (as in the second movement). At times there are echoes of Chopin in the piano writing.

Written in 1968, Sonata for Violin and Piano, Op. 134 was one of Shostakovich’s last works. The atmosphere of the music, sometimes eerie, other times sarcastic or ferocious, comes across beautifully in this performance. The sonata was written for David Oistrakh in celebration of his 60th birthday. Oistrakh explained:

Dmitri had been wanting to write a new, second concerto for me as a present for my 60th birthday. However, there was an error of one year in his timing. The concerto was ready for my 59th birthday. Shortly afterwards, Dmitri seemed to think that, having made a mistake, he ought to correct it. That is how he came to write the Sonata … I had not been expecting it, though I had long been hoping that he would write a violin sonata.

You can find this recording on iTunes and here. Read more in this review from last month’s Strad Magazine.