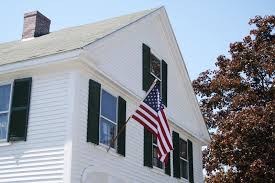 Listen closely to Charles Ives’ Decoration Day and you may hear the lament of the dead.* The piece evokes ghosts of the battlefield and the distant echoes of small town New England observances of Decoration Day, the solemn American holiday of remembrance, started in the aftermath of the Civil War. It’s the holiday we now know as Memorial Day.

Decoration Day is the second movement of Ives’ four movement Holidays Symphony, written between 1897 and 1913. Ives intended each movement to function effectively as a stand-alone piece, and that is how it’s often programmed. The music is rooted in the mysterious power of memory-specifically Ives’ childhood memories of holiday celebrations. Fragments of folk songs, Civil War melodies, and hymns such as Adeste Fideles are layered, blending into a dreamlike atmosphere. Listen for the solitary trumpet call, Taps, the sounds of a marching band in a small town parade, and the concluding plagal cadence, used in the “Amen” of protestant hymns.

In the relative isolation of early twentieth century New England, Ives was pushing the boundaries of tonality in shocking ways, mirroring and in some cases anticipating similar developments in Europe. At times, Decoration Day sounds like a late Mahler adagio in terms of its orchestration as well as its disintegrating tonality.

Here is a recent recording by Michael Tilson Thomas and the San Francisco Symphony:

Here is Ives’ description of the piece:

In the early morning the gardens and woods around the village are the meeting places of those who, with tender memories and devoted hands, gather the flowers for the Day’s Memorial. During the forenoon as the people join each other on the Green there is felt, at times, a fervency and intensity–a shadow perhaps of the fanatical harshness–reflecting old Abolitionist days. It is a day as Thoreau suggests, when there is a pervading consciousness of “Nature’s kinship with the lower order-man.”

After the Town Hall is filled with the Spring’s harvest of lilacs, daisies, and peonies, the parade is slowly formed on Main Street. First come the three Marshals on plough horses (going sideways), then the Warden and Burgesses in carriages, the Village Cornet Band, the G.A.R., two by two, the Militia (Company G), while the volunteer Fire Brigade, drawing a decorated hose-cart, with its jangling bells, brings up the rear-the inevitable swarm of small boys following. The march to Wooster Cemetery is a thing a boy never forgets. The roll of the muffled drums and “Adestes Fideles” answer for the dirge. A little girl on a fencepost waves to her father and wonders if he looked like that at Gettysburg.

After the last grave is decorated, Taps sounds out through the pines and hickories, while a last hymn is sung. The ranks are formed again, and “we all march to town” to a Yankee stimulant-Reeves inspiring Second Regiment Quickstep-though, to many a soldier, the sombre thoughts of the day underlie the tunes of the band. The march stops-and in the silence of the shadow of the early morning flower-song rises over the Town, and the sunset behind the West Mountain breathes its benediction upon the Day.

For more on Ives’ Holiday’s Symphony, watch this episode of Keeping Score with Michael Tilson Thomas. Listen to the final movement of the symphony, Thanksgiving Day, in my previous post.

*See the recently published book, Lament of the Dead: Psychology After Jung’s Red Book by James Hillman and Sonu Shamdasani.