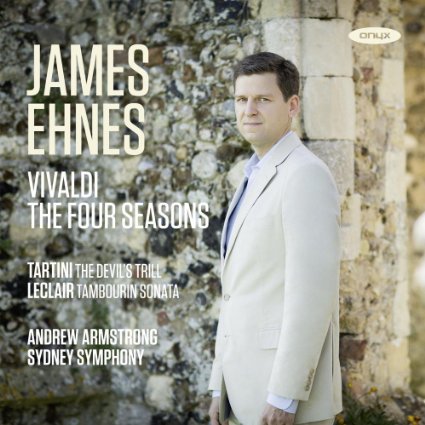 Vivaldi’s Four Seasons may be the most recorded piece ever written, but that doesn’t mean there isn’t room for another great new addition to the catalogue. The newest contribution comes from Canadian-born violinist James Ehnes who has just released a Four Seasons disc with the Sydney Symphony Orchestra on the Onyx Classics label. It’s always fun to hear different approaches to these famous Vivaldi concertos, some using baroque instruments and performance practice. Here, you’ll hear a full-toned, modern approach to the music. The recording also features Fritz Kreisler’s arrangement of Tartini’s “Devil’s Trill” Sonata, as well as Leclair’s “Tambourin” Sonata, accompanied by pianist Andrew Armstrong.

Jean-Marie Leclair (1697-1764) was the greatest French violinist of the eighteenth century, “the Corelli of France.” Listen to the rich array of tonal colors and the intimate conversation which takes place between the violin and piano in the third movement of the Leclair, Sarabanda: Largo:

Leclair’s Op. 9, No. 3 violin sonata gets its nickname from this fun, folk dance-inspired final movement:

Finally, just in time for winter, here is the icy chill of the first movement of “Winter” from The Four Seasons:

There’s an old joke that Antonio Vivaldi didn’t write 500 concertos, he wrote the same concerto 500 times. Vivaldi’s own performances were undoubtedly infused with a virtuosic freedom and sense of spontaneity that grew out of improvisation and ornamentation. Robbed of these elements, modern performances of Vivaldi can sometimes sound formulaic, like bland elevator music.

But if you want to hear just how exciting and adventurous Vivaldi’s music can be, listen to the edge-of-your-seat period playing of Russian violinist Dmitry Sinkovsky. A few weeks ago, Sinkovsky appeared with Belgian baroque ensemble B’Rock (Baroque Orchestra Ghent) at the BBC Proms (Listen to that concert here). Notice the stunning virtuosity in the cadenza of the Violin Concerto in D major, RV 208 ‘Grosso Mogul,’ towards the end of the concert. In moments like this, Sinkovsky perfectly captures the fun-loving abandon of this music.

Below is Dmitry Sinkovsky’s 2012 recording, Concerti per Violino “Per Pisendel” with Il Pomo d’Oro. He talks about the recording here. Johann Georg Pisendel (1687-1755) was a German violinist and composer who led the Court Orchestra of Dresden. Pisendel studied with Vivaldi around 1716 and received the dedication of several of Vivaldi’s scores.

Concerto for Violin, Strings and B.C. in C major RV 177, which opens the recording, explodes with an almost Stravinsky-like punch and some jarring dissonances (0:40). At moments, Sinkovsky’s tone takes on a strikingly vocal quality, interspersed with percussive effects (3:50). The D major concerto which follows (RV 212a) features an extended cadenza, which daringly cycles through a series of keys (beginning at 17:22).

Shall I compare thee to a summer’s day?
Thou art more lovely and more temperate:
Rough winds do shake the darling buds of May,
And summer’s lease hath all too short a date:
Sometime too hot the eye of heaven shines,
And often is his gold complexion dimm’d;
And every fair from fair sometime declines,
By chance or nature’s changing course untrimm’d;
But thy eternal summer shall not fade
Nor lose possession of that fair thou owest;
Nor shall Death brag thou wander’st in his shade,
When in eternal lines to time thou growest:
So long as men can breathe or eyes can see,
So long lives this and this gives life to thee.

Let’s begin with violinist Janine Jansen’s exciting approach to Antonio Vivaldi’s The Four Seasons. This performance features an unusual edge-of-your seat passion and fire. The dramatic effects of Vivaldi’s music come to life in a way that makes the music feel fresh, as if it was just written:

Next, let’s listen to an excerpt from Alexander Glazunov’s lushly romantic 1899 ballet score, The Seasons. At the beginning of the clip, we hear the triumphant moment when spring turns to summer. It’s soaring music that deserves to be heard more often. This recording features the Cleveland Orchestra, conducted by Vladimir Ashkenazy:

Jascha Heifetz’s transcription of George Gershwin’s Summertime from the opera Porgy and Bess is a timeless gem. Here is Heifetz’s recording: