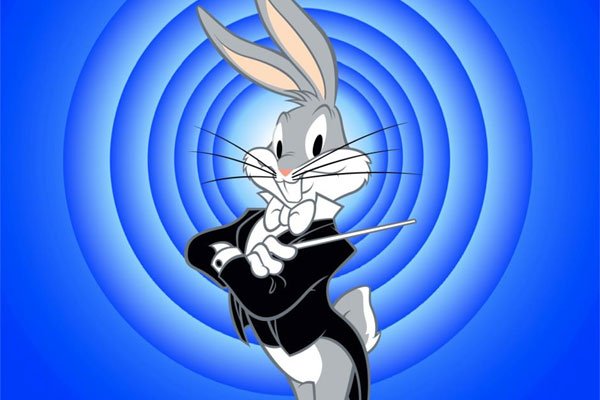 The Richmond Symphony season is winding down. But this weekend we’ll be busy performing the popular touring show, Bugs Bunny at the Symphony II with conductor George Daugherty. The show is a tribute to the music of classic Warner Brothers’ cartoons. Generations of viewers gained an exposure to classical music through these zany cartoons, which included:

Cartoons had an interesting influence on John Adams’ Chamber Symphony, written in 1992. Here is an excerpt from the composer’s website:

I originally set out to write a children’s piece, and my intentions were to sample the voices of children and work them into a fabric of acoustic and electronic instruments. But before I began that project I had another one of those strange interludes that often lead to a new piece. This one involved a brief moment of what Melville called “the shock of recognition”: I was sitting in my studio, studying the score to Schoenberg’s Chamber Symphony, and as I was doing so I became aware that my seven year old son Sam was in the adjacent room watching cartoons (good cartoons, old ones from the ’50’s). The hyperactive, insistently aggressive and acrobatic scores for the cartoons mixed in my head with the Schoenberg music, itself hyperactive, acrobatic and not a little aggressive, and I realized suddenly how much these two traditions had in common.

Beyond the instrumentation, Adams’ Chamber Symphony, “infected” with its cartoon-inspired elements, goes in a slightly different direction. Its outer movements drive forward with an unrelenting pulse as exhilarating musical volleys fly by. At moments it’s Stravinsky with a drum set. The wandering trombone solo in the second movement seems to have taken a wrong turn from some unwritten chorale line in Paul Hindemith’s Mathis der Maler (1934).

We hear a host of outrageous and indestructible characters. Despite crazy, fast-paced adventures, collisions, explosions and other mishaps, the beat goes on. And in each movement, one of the most interesting aspects of this piece is what happens around this steady and undisrupted pulse.

What did you think of John Adams’ Chamber Symphony? It’s a piece that can inspire strong emotions. Regardless of whether you loved or hated the music, take a moment and tell us about your experience in the thread below, as well as any other thoughts on music and cartoons.