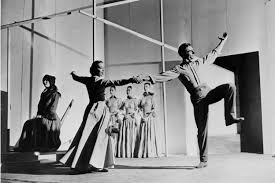 Appalachian Spring is a ballet about freedom and endless possibility…the joy and terror of the blank slate at the heart of the mythical American pioneering spirit. The story centers around a young, newly married couple and the building of a farmhouse on an open plot of land in early 1900s rural Pennsylvania. It’s easy to sense a longing for a mythical America of wide open spaces, which had long vanished by 1944 when Aaron Copland and Martha Graham created Appalachian Spring. At the same time, the ballet explores universal themes. There is a tension between the freedom of youth and the grounding of experience. Here is how Copland described the piece:

The bride-to-be and the young farmer-husband enact the emotions, joyful and apprehensive, which their new domestic partnership invites. An old neighbor suggests, now and then, the rocky confidence of experience. A revivalist and his followers remind the new householders of the strange and terrible aspects of human fate. At the end the couple are left quiet and strong in their new house.

Last month I offered a few thoughts on the music of Appalachian Spring and a unique performance by students at the University of Maryland. Now let’s watch a 1959 film of the complete ballet, featuring choreographer Martha Graham in the role of The Bride. Copland wrote the music under the working title, “Ballet for Martha.” 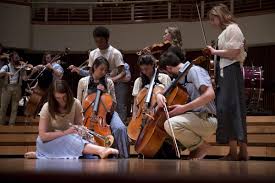 A recent University of Maryland School of Music student performance of Aaron Copland’s Appalachian Spring is gaining well deserved attention. The performance was unique because it defied almost all of the conventions of the typical concert experience. There were no chairs or music stands onstage and there was no conductor. Instead, the 25-minute-long work was performed by memory and the musicians not only played, but incorporated elements of dance and motion created by Baltimore choreographer Liz Lerman. The Washington Post critic called it, “one of the standout performances of my many years in Washington.”

In 2012 the school offered a similar performance with Debussy’s sensuous Prelude to the Afternoon of a Faun. The concept is similar to recent Broadway theater productions of shows such as Stephen Sondheim’s Sweeney Todd, in which actors on stage also played instruments.

In this piece, the Washington Post’s Anne Midgette suggests that visual elements are an important ingredient to building new audiences:

What part does movement have in musical performance? Musicians seem uncertain — or unaware. On the one hand, it’s a new truism that classical music concerts “need” a visual element to captivate new audiences (“Classical music must, in order to survive, introduce visual elements into its presentation,” wrote Patricia Handy in her program notes for Augustin Hadelich’s ostensibly theatrical “Tango, Song and Dance” program at the Terrace Theater last week).

But how much truth is there in Midgette’s “new truism?” Statements such as these, part of a constant and often assumption-based media drumbeat that “classical music is dying”, seem dubious. Copland’s Appalachian Spring and other great music, when performed well, will always have an audience. The expressive power of music lies in the fact that it’s fundamentally about listening, not watching. Audience members who lack the attention span to really listen will miss the true experience. It’s the challenge of music education to teach audiences how to listen. Exposure to music at an early age is an important part of this education.

The University of Maryland’s exciting and heartfelt performance is interesting for what it is: a creative way to blend dance and music into a new kind of performance art. In this case, it may be especially successful because Appalachian Spring was written as a ballet. For the students, who gained a deeper understanding of the way the piece fits together and experienced it as chamber music, there is also value.

Here is the complete performance:

Premiering in 1944, Aaron Copland’s Appalachian Spring was written for choreographer Martha Graham, who danced the leading role. It was originally scored for a chamber orchestra of 13 instruments. Listen to the original version here. Copland gave the piece the simple working title, Ballet for Martha. Later, after the music had been written, Graham suggested Appalachian Spring, a reference to Hart Crane’s poem, The Bridge:

From its opening pandiatonic chords, Appalachian Spring embodies a distinctly “American” sound. Rob Kapilow offers fascinating insights about the way the piece develops out of these chords and why they evoke the wide open spaces of the American frontier. The incorporation of variations on the Shaker melody, Simple Gifts, suggests a nationalism similar to the use of Russian folk songs in Stravinsky’s ballet music.

In this rare recording of Copland rehearsing Appalachian Spring with an unknown orchestra, we hear the composer urge musicians to play passages with less sentimentality, finding a more honest, “American” sound. The clip offers valuable insights into what Copland had in mind in terms of tone color, articulation and balance.

If you’re looking for a great recording of this piece, I recommend Leonard Bernstein’s 1983 recording with the Los Angeles Philharmonic.

Sometimes it’s hard to tell the difference between Greek mythology and a modern-day soap opera plot. A perfect example is the story of Medea and Jason, recounted in a play by Euripides from 431 BC. Jason marries Media, but leaves her for Glauce, daughter of Creon, the King of Corinth. Medea gruesomely avenges Jason’s betrayal by killing their children.

Barber explains that the ballet went beyond the story to reflect the underlying timeless emotions:

[quote]Neither Miss Graham nor the composer wished to use the Medea-Jason legend literally in the ballet. These mythical figures served rather to project psychological states of jealousy and vengeance which are timeless. The choreography and music were conceived, as it were, on two time levels, the ancient mythical and the contemporary…As the tension and conflict between them increases, they step out of their legendary roles from time to time and become the modern man and woman, caught in the nets of jealousy and destructive love.[/quote]

Later, Barber adapted music from the ballet for Medea’s Dance of Vengeance, Op.23a. He wrote a short introduction in the score:

[quote] The present version, rescored for large orchestra in 1955, is in one continuous movement and is based on material from the ballet which is directly related to the central character, Medea. Tracing her emotions from her tender feelings towards her children, through her mounting suspicions and anguish at her husband’s betrayal and her decision to avenge herself, the piece increases in intensity to close in the frenzied Dance of Vengeance of Medea, the Sorceress descended from the Sun God. [/quote]

Let’s listen to a recording by Marin Alsop and the Royal Scottish National Orchestra:

There’s something almost cinematic about the opening of this piece. It immediately establishes a distinct mood in the way a film score would underscore an opening scene. Beginning at 0:59, consider each solo voice’s unique persona, from the flute, clarinet and oboe to the string interjections. Can you hear a sense of anxiety slowly creeping into this virtual movie soundtrack? Does the music conjure up specific images or just feelings?

At 8:20, listen to the obsessive furry of the repeated piano line. Notice how this deranged line falls in on itself rhythmically at 9:40. The piece ends in a frenzy of madness. At what point do passion and love cross the line to insanity?

[quote]Medea: “Look, my soft eyes have suddenly filled with tears:
O children, how ready to cry I am, how full of foreboding!
Jason wrongs me, though I have never injured him.
He has taken a wife to his house, supplanting me…
Now I am in the full force of the storm of hate.
I will make dead bodies of three of my enemies–
father, the girl and my husband!
Come, Medea, whose father was noble,
Whose grandfather God of the sun,
Go forward to the dreadful act.”[/quote]