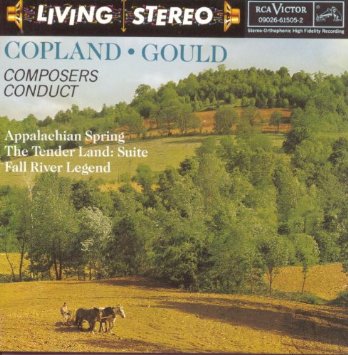 The Promise of Living, the soaring finale of Aaron Copland’s 1954 opera, The Tender Land, seems vaguely appropriate for Labor Day. Its libretto by Horace Everett (a pseudonym for Erik Johns) evokes the dignity and meaningfulness of labor. Honest work, in this case cultivating the soil of the American heartland and reaping the blessings of a rich harvest, is part of a balanced and fulfilled life:

The promise of living with hope and thanksgiving
is born of our loving our friends and our labor.

The promise of growing with faith and with knowing
is born of our sharing our love with our neighbor.

For many a year we’ve known these fields and known all the work that makes them yield.
Are you ready to lend a hand? We’ll bring in the harvest, the blessings of harvest.

We plant each row with seeds of grain, and Providence sends us the sun and the rain.
By lending a hand, by lending an arm, bring out from the farm,
bring out the blessings of harvest.

The promise of ending in right understanding
is peace in our own hearts and peace with our neighbor.

The Tender Land, set in the 1930s around the spring harvest and the high school graduation of its main protagonist, Laurie Moss, wasn’t a success. Originally written for the NBC Television Opera Workshop, it was rejected by network producers, perhaps because of weaknesses in its plot and characters. It premiered at New York City Opera on April 1, 1954, with Thomas Schippers conducting and Jerome Robbins as director; but the work, which was intended for the intimacy of television, didn’t translate well to the stage. Still, this glistening excerpt, performed by Dawn Upshaw, gives a sense of the quality of the score.

Putting aside The Tender Land’s rejection by NBC, it’s amazing to consider that there was a time in the United States when commercial network television executives commissioned prominent composers to write television operas. These were the days when NBC and CBS each had their own in-house orchestra. NBC Opera Theatre, which operated from 1949 to 1964, produced Gian Carlo Menotti’s Amahl and the Night Visitors, Lukas Foss’ Griffelkin, and Norman Dello Joio’s The Trial at Rouen, among other operas.

In 1958, Copland gathered up the opera’s neglected music and created an orchestral suite (listen to the complete score here). Below is the orchestral version of The Promise of Living from a 1960 Boston Symphony recording, with Copland conducting. The music seems to awaken slowly, like early morning sun hitting a dewy pasture. Growing out of a single, sustained horn pitch, it unfolds into a majestic hymn of thanksgiving. The final chord encompasses the full range of the orchestra, from the lowest bass notes to the shimmering high strings, suggesting the eternity of a wide open prairie landscape: