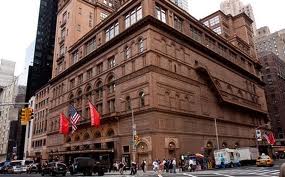 Last Wednesday the Rochester Philharmonic Orchestra presented an outstanding concert performance of Howard Hanson’s opera, Merry Mount at Carnegie Hall as part of the Spring For Music festival. In a previous post I provided some background on Hanson and the opera, which had not been heard in New York since its Metropolitan Opera premiere in 1934.

If you missed the performance and the live radio broadcast, you can listen to it here. Read reviews of the performance here and here. The New York Times review referred to Merry Mount as a “period piece”, but its topic of religious fundamentalism and repression could not be more relevant today.

A Carnegie Hall performance not only showcases the visiting orchestra on an international stage; it also generates community pride at home, as this local news clip shows. With the RPO currently in the middle of a search for a new music director, this seems like an excellent time for the community to take stock of its hometown team. The recording above demonstrates the ensemble’s extraordinary polish and musicianship.

The following notes, which appeared in the program, discuss Merry Mount and Howard Hanson’s connection to Rochester:

“Be as a lion, dread Jehovah, and tear the flesh of unbelievers.”

So begins Merry Mount, the only opera that the American composer Howard Hanson wrote. Full of Puritanical hell-fire and brimstone, the quintessentially American story centers on the conflict between religious fanatics and hedonistic, free-thinking cavaliers, exploring age-old dichotomies between piety and desire, restraint and excess, spiritual and sensual—and exposing the dire consequences of repression.

No other composer would have been as fitting a choice as Howard Hanson for the Rochester Philharmonic Orchestra’s Spring for Music program, for no other figure has shaped the city’s musical climate so profoundly. The Nebraska native came to Rochester in 1924 to be the director at the University of Rochester’s Eastman School of Music. During his 40-year reign, Hanson molded the school into one of the most highly-rated conservatories in the world, a legacy that continues to this day. At a time when established European works dominated the classical music scene, Hanson strove to give American music a place in the concert hall, initiating a series of American composers concerts at Eastman, and later, an annual festival devoted to American music. Hanson was instrumental in elevating Eastman’s international profile throughout the middle decades of the 20th century, simultaneously turning Rochester into a center for new American music.

A celebrated composer, Hanson continued writing throughout his tenure at Eastman, and it was during this time that he created Merry Mount. Although he composed throughout the rise of the 12-tone movement, his style remained steadfastly lush, Romantic, and approachable. His gift for melody shines through in tonight’s program. Commissioned by the Metropolitan Opera, Merry Mount had its stage premiere there in 1934, and met with an enthusiastic response (it still holds the Met record for curtain calls, a whopping 50). But despite the initial buzz, modern revivals and concert performances are rare.

The Rochester Philharmonic Orchestra is thrilled to bring Howard Hanson’s masterpiece back to the New York City stage, 80 years after its premiere and 50 years after Hanson’s retirement from Eastman. Today, Rochester remains a thriving musical hub steeped in world-class talent. The RPO and the Eastman School of Music enjoy the same synergistic relationship that was fostered during Hanson’s tenure, each contributing to a rich musical landscape that belies the city’s size.

Enriching this landscape has been a priority of the Rochester Philharmonic Orchestra since its founding. Committed to the importance of lifelong musical engagement, the RPO inspires audiences of all ages with a variety of offerings each season, bringing the thrill of live music to Rochester and the Finger Lakes region. Currently in the midst of an international search for its next music director, the RPO is well positioned to build upon its proud musical legacy for the next generation of concertgoers.

This concert production of Merry Mount embodies the spirit of everything that Howard Hanson helped to create and showcases everything that makes Rochester’s musical scene so special, joining young and old, current Eastman students, recent Eastman graduates, talented local singers, and the musicians of the Rochester Philharmonic Orchestra for a celebration of Rochester—past, present, and future.